In Memory of Galen Ohmart

When you work closely with someone for 20 years as business partner and professional collaborator, you cannot help but contribute to each other’s creative output.  Galen and I were mutually dependent on each other for our livelihood though not our hobbies.  Yet being one’s business partner is a unique intimate relationship.  We were each other’s creative mentors as well as foils.  Today, I’d like to share with you some of that creative output that was Galen the architect – at least through the filter of my experience.

One of my mentors, prior to my partnership with Galen, would often say, “The only thing that is certain, is that we will live on in the creativity that we engender in others.”  For a creative design architect – and Galen was that – one can live on in the buildings that he or she has designed and that have been built.

For me, the qualities that stand out in Galen’s life as an architect are his practicality, his flexibility, his ability to do more with less, his interest in solar energy and energy efficiency as prime design drivers, and his commitment to design performance as measured by the occupant experience of living and working in his buildings.  He enjoyed working with building typologies that many architects dismiss.  Yet he could and did work with many project types from shops, to sports centers, to restaurants, to retail stores, to offices, to residences.  And he delivered excellence in design on many projects that had limited budgets and resources.  So I’d like to take us on a brief tour of a few of Galen’s projects – images of which are on the photo display. 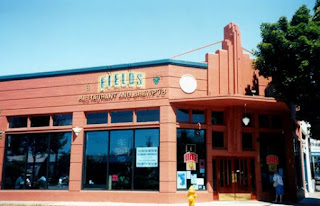 Shortly after Galen first connected with myself and Gene Johnson, he had a bit of a detour in the road of his professional life as he attempted to become one of the first generation of Eugene brewpub entrepreneurs.  His experience with Field’s Brew Pub became a constant lesson in our business relationships, but his role as Field’s architectural partner was illustrative of one of the consistent elements of Galen’s architectural experience - that was the ability to re-make an existing old building into something new, exciting, and useful.  The Field’s Restaurant and BrewPub created a new life for the old Brother Jonathon’s outdoor store building with its art deco façade, barrel roof, and significant street presence.  Galen contributed to Field’s interior design,  including the design of custom lighting fixtures, and the design of the brewing and process equipment layout.  Fortunately for those of us who appreciated his architectural talents, Fields did not turn into the business success that the owners had hoped.  Galen continued with several restaurant projects over his career including many of the Café Yumm restaurants.  Throughout his career, he continued to be involved in the remaking of old existing buildings.  Among his notable building renewal projects are the Marion County Health Clinic in Salem, A3 Academy of Arts and Academics in downtown Springfield, and the Cottage Grove Shops.

The Cottage Grove City Shops represented the official first project executed by Galen, Gene, and myself as Solarc Architecture and Engineering.  At first glance, the building doesn’t jump out at one as notable architecture.  But it represents one of the building types that Galen loved to work with – the engineered metal building.  This was a project that included many high performance, aka energy efficiency design features – another important design driver in Galen’s work.  As a former railcar repair facility, the concrete floor slab was massive, and became a focus of the project.  When the project was complete, the old railcar repair shop had a new life as the Cottage Grove City Shops.  And the new city shops had daylight, natural ventilation, and a heated floor slab – a premium shop environment at a bargain price.  Besides highlighting his commitment to design performance on behalf of the occupants of his buildings, I love this project because it shows Galen’s practical side as an architect.  This is not a sexy design in architectural terms.  Yet it represents excellence in satisfying the needs of the City and delivering the best shop possible within the City’s budget, and creating a great shop in which to work.  This was a theme that carried forward into the Food for Lane County project. 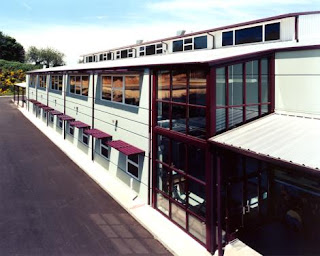 Food for Lane County was Galen’s “home-run” project while still practicing with his firm Integrare in Eugene.  It was recognized with a national Architecture + Energy Award.  The summary of the award jurors summarized Galen’s architectural values and expression:

“The jury applauded the Food for Lane County building as a simple, no-frills design, incorporating a host of sustainable features on a small budget.”
Galen’s personal description of the project included the followi 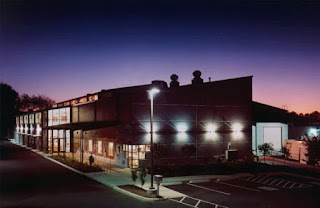 ng quote from article written at the time.

“Ohmart emphasizes the importance of "creating a space in which people want to work." He notes that although energy costs are increasing, the bottom-line savings to the agency are small in relation to overall operations costs. The occupants are more concerned with their comfort in the building than how much it costs to heat and cool the building.”
Galen was clearly most proud that Food for Lane County was a great place to work!  It has also been a most important contribution to the Eugene/Springfield community.  That is another career theme that warrants note.  Galen designed many buildings that have become important community focal points and gathering places, helping to make a better community.  Some other examples include Kick City Indoor Soccer Park in Springfield, the Bob Keefer Center (aka Springfield Sports Complex), Corvallis Sports Park Indoor Soccer Facility, EWEB’s Lloyd Know Park Shelter at Leaburg on the McKenzie River, and LCC’s Solar Station Electric Vehicle Charging Station at the main campus in Eugene.  These are all projects, that like Food for Lane County, continue to make active contributions to their communities.  I like to think of these as Galen’s continuing contributions to the communities of Eugene, Springfield, and Western Oregon. 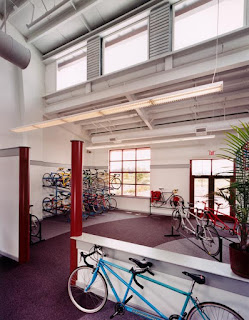 Co-motion Cycles represents a culmination and integration of sorts in Galen’s design career.  The building massing, orientation, and façade all speak to daylighting, natural ventilation, and solar control to maintain summertime indoor comfort without mechanical air-conditioning.  The building form is striking actually, especially in comparison to its neighboring buildings.  Yet it is a variation on engineered metal building technology.

The project was featured in a national energy conference white paper in 2004 where occupant satisfaction with these various form-driven performance features was evaluated and reported.  In addition to general satisfaction, the owner of Co-Motion stated that his building’s daylighting characteristics make it unique in an otherwise industrial area. The unique quality has positively influenced customers of his high-end cycling product.  This was the type of feedback that stoked Galen’s enthusiasm to continue on his architectural design adventure. 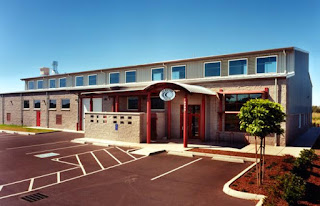 Over the years, I didn’t see many places where Galen’s life as an architect intersected with his life as an outdoor adventurer and recreationalist.  Co-motion was one of the few examples. Here was an avid recreational bicyclist designing a facility where high end tandem bicycles would be manufactured.  In my opinion, Co-motion remains a unique building in and otherwise industrial area in west Eugene.  And a building form that influenced Galen’s subsequent designs including the Klamath County Shops, Kennewick Irrigation district offices, and city of Albany Crew Quarters building.

For those who live in Eugene or Springfield, or would contemplate a visit, I have put together a map of some of Galen’s designs.  Please pick one up today and plan a tour.  It really will be a way to allow Galen to live on in your life through his creativity.

Popular posts from this blog

The Value Proposition for Energy Modeling

September 07, 2017
It may seem counter-intuitive for an energy modeling consultant to suggest that the real value proposition for energy modeling is not energy performance accounting.  But that is what I am suggesting.  The most significant value proposition for energy modeling is:
The Use of Modeling to Inform the Integrated Design of a High Performance Building from Start to Completion
This is my goal for all energy modeling and all projects.  It is also the motivation behind my efforts to encourage market-wide development of sophisticated modeling capabilities. Energy modeling is an extremely powerful design tool, when applied by the right practitioner.  A good model calculates heating and cooling loads for every hour of the year in every zone within a building design.  Further, it disaggregates loads into contributing components and allows detailed loads analysis associated with each building component (windows, walls, lighting, infiltration, etc.)  If we accept that in order to achieve exceptional …
Post a Comment
Read more